Changa Vateshwar Shiva Temple at Saswad is located at the foothills of Purandar fort in Narayanpur. The Shiva temple is a lesser-known destination around Pune.

This ancient temple is very grand in architecture and designs which is like the sangameswar temple located extremely near to this place. The entrance hall or nandi mantapam is unbelievably beautiful with big decorated nandi that has original styles of two pillar and four pillars joined together to support the roof which is impressive.

The pillars of nandi mantapam are excellent with some sculpture of two lions talking together in opposite direction, two parrots sitting in opposite direction, standing bear like animal, lotus flowers, war scenes of durga and her female followers holding the skull makes you happy to see the life in the ancient art of carvings.

The inner hall or sanctum hall with its lotus ceiling designs is also impressive with simple ancient pillars having traces of modern paintings along with simple sanctum door without any sculpture.

The outer structure of sanctum pyramid is beautiful with ancient lamp style stone pillars at the base and colorful designs, elephants, tiny stucco images along with miniature temple dome tower designs on the upper layers leading to the kalasham is worth visiting this temple when you are in this area.

Outer upper layers of both the halls also has unique brick tower pyramids with dome placed above the lotus flower designs which are unique as they are mostly used in Islamic structures. 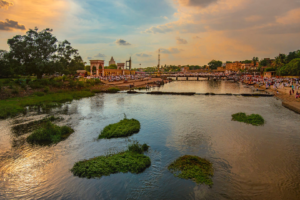